You may never have seen a high-fin-banded shark available in the pet trade.

You may have seen one and not known it, thanks to their many common names. However, Chinese high fin banded should not be overlooked.

It is a unique bottom feeder for your tank or pond. While these fish may be known as the ugly duckling in reverse, they actually have a lot to offer.

What is the Chinese High Fin Banded Shark? The Chinese high fin banded shark (Myxocyprinus asiaticus) is not really a shark, despite the name. It is true, however, that they bear a striking resemblance to sharks. This resemblance is due to their distinct dorsal fin and body shape.

Nevertheless, they belong to the Catostomidae family. They are known by many different common names, including:

No wonder there can be some confusion about exactly what this shark really is.

In the wild, the Chinese high fin banded is native to the Yangtze River Basin of China. However, the population in the wild has been dramatically reduced due to overfishing, competition with introduced species, and collection.

But wait, let us tell you something. If you see an adult banded shark (myxocyprinus asiaticus), you may find yourself questioning why it has so many common names, including “banded.”

Turns out; juveniles lose their stripes. They have a much less distinct high dorsal that makes them look less like a shark than the juveniles as well.

The Chinese high fin banded shark feeds on algae and other vegetation that it finds in its Chinese stream habitat. It uses a single row of pharyngeal teeth to rip at the vegetation and collect morsels.

How Long Does the Chinese High Fin Banded Shark Live?

Simply put, if you are looking for a long-lived freshwater pet, this may be the one for you. The Chinese high fin banded shark can live as long as 10 or 15 years when kept captive. In fact, they have been known to have a lifespan as long as 25 years when kept in ideal conditions.

On the other hand, unfortunately for the Chinese high fin banded sharks, we have found that few individuals get to live this long. Keeping them under ideal conditions isn’t always easy.

It is particularly difficult to provide an aquarium or other space that is large enough. Outside of their native Chinese environment, these fish can be challenging for the home keeper.

Why are so Many Chinese High Fin Banded Sharks Discarded?

In case you might be asking yourself why so many fish are discarded, here’s the answer. Many Chinese high fin banded sharks that are purchased do not live out their entire lives with their original owner. There are two primary reasons for this:

It turns out that juveniles of the species are quite striking. They have a distinct tall dorsal fin, banded markings on the body, and speckles on the fins. However, as these fish grow and reach sexual maturity, their appearance changes.

You see, bands found on young Chinese high fin banded sharks generally disappear. They’re gone by the time the fish is 12 – 24 inches ( or around 36 cm) long.

Adult fish may look more like a dull koi than they do like a striped Chinese shark.

On the other hand, the female adult Chinese high fin banded may acquire a charming purple color. This generally occurs when they reach sexual maturity.

In our experience, juvenile sharks are typically purchased when they are only a couple of inches long. However, juvenile Chinese banded sharks grow very big very quickly.

How Quickly Do Hi-fin Shark Grow?

Simply put, an adult size like this may not be ideal for many keepers, no matter how striking their appearance

You see, the Chinese topsail sucker is not a tropical fish. Many people may purchase the high fin banded sucker for a community tank.

In fact, they do not need the same water parameters as tropical fish. The high dorsal sucker requires cold water, generally between 55 and 75 degrees year-round.

This unusually cold temperature means that they are not an ideal tank mate for many other fish. 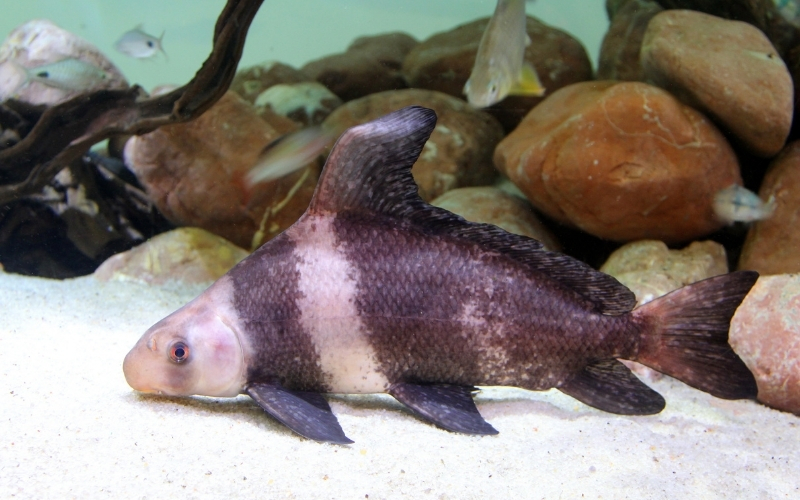 By now, you should realize that the hi fin is not a good shark look-alike for every aquarium keeper. This is a fact, despite their interesting appearance.

However, you may be willing to search out this long-lived fish with a changing appearance. You may understand that it requires a large space. It’s true that these can be interesting freshwater species for the right owner.

No wonder the Chinese high fin banded sharks need a lot of room:

We’ve found that only for a brief period in their first year can the banded shark thrive in an aquarium of around fifty or seventy-five gallons. This is the only time they can tolerate a tank more acceptable for the average homeowner.

After that, you will need to search out a bigger home for the adult.

On the other hand, you do have another option. The high fin banded shark Myxocyprinus asiaticus can do very well as a pond species. This is true in many areas of the United States and the world.

Here’s why: because this sucker prefers cooler temperatures. You can keep them outdoors in a pond habitat year-round in many climates.

Many people find this to be a much more reasonable way to keep Chinese high fin banded sharks. If you are considering breeding, a setup like this is really your only option for this Chinese sucker.

And the good news? There is a great degree of variability in the water parameters that Chinese high fin banded sharks can tolerate.

This relative hardiness can be a tremendous advantage when keeping this sucker.

This species can put up with higher nitrate levels than many other types of fish as well. You see, this is part of why they can do so well when kept in a pond.

Setting Up The Habitat

We already talked about the large space that these fish require. If you want to try breeding, you also need deeper and shallower parts of the environment.

As if that’s not enough, these fish have specific needs. This is true whether you are establishing a large tank or a pond for your high fin banded shark.

Here are some things we recommend when setting up the tank:

In our experience, the Chinese high fin banded sucker keeps its body near the bottom. This is because this freshwater fish, like most loach-type suckerfish, is a bottom feeder.

You see, in their native river environment, this sucker will search out tidbits. It looks for anything that may have been missed by other fish along the substrate.

So as to not injure the scales on the bottom of their body, choose substate carefully. It is best to choose a relatively fine substrate.

Chinese high fin banded sharks are a river species. It should come as no surprise that they prefer heavier flow in their freshwater environment. It turns out, as high-fin-banded sharks get bigger, they can release a lot of waste into the water.

This waste can result in heavy ammonia levels without sufficient filtration. Juveniles may not cause as much waste, but they will still prefer high flow.

Think about it: The strong dorsal fin and powerful body of high fin-banded sharks enable strong swimming. Even as juveniles, they are strong swimmers. As their length increases, this sucker will be able to swim even more strongly.

Nevertheless, you may prefer a more peaceful environment for other fish that will share the pond or aquarium. These fish may not come from a river environment. We recommend:

We recommend that you include plants that are tolerant of cooler temperatures and high flow.

Simply put, if you are considering breeding your Chinese high fin banded fish, plants matter. Replicating their native Chinese environment will be even more important for breeding.

On the other hand, be sure to leave plenty of fresh water for your shark to enjoy. The Chinese streams that these fish come from including plenty of open space. There needs to be space where the shark can swim freely and reach its considerable length.

Despite its name, we have found that the Chinese sailfin sucker is very social. They actually do well with all sorts of different freshwater fish.

What does this mean for you? There are a number of different species that will do well with the peaceful Chinese high fin banded fish.

In case you might be asking yourself, the most important requirement is that they tolerate cooler temperatures. Even small fish are perfectly compatible with the Chinese high fin banded fish.

It will not consider them to be prey even if they are only several inches long.

Turns out, as long as they are big enough to not fit in its mouth, they will do fine. Fish of any size and length can work well.

No, Chinese High Fin Banded Sharks aren’t known for aggression. They get along well with other peaceful fish and can cohabitate with larger creatures without any issues!

This suckerfish is not picky about its food. In fact, we have found that just about anything that floats down into its freshwater habitat will do.

Just about anything can serve as food for the Chinese high fin banded fish. They are primarily vegetarian but also enjoy live offerings and meat.

What does this mean for you? They do well with:

They may also see mollusks as food, which can be convenient if your snail population tends to breed too readily.

Diseases that may Affect the Chinese High Fin Banded Fish It turns out, most of the common diseases that affect freshwater fish may also affect the Chinese high fin. Ich, dropsy, and swim bladder disease can all be problematic for them. Usually, issues come up for the hardy myxocyprinus asiaticus only when water conditions are not met.

By now, you should realize that you just need to provide decent care. If you do, you are unlikely to have trouble with high-fin-banded sharks. 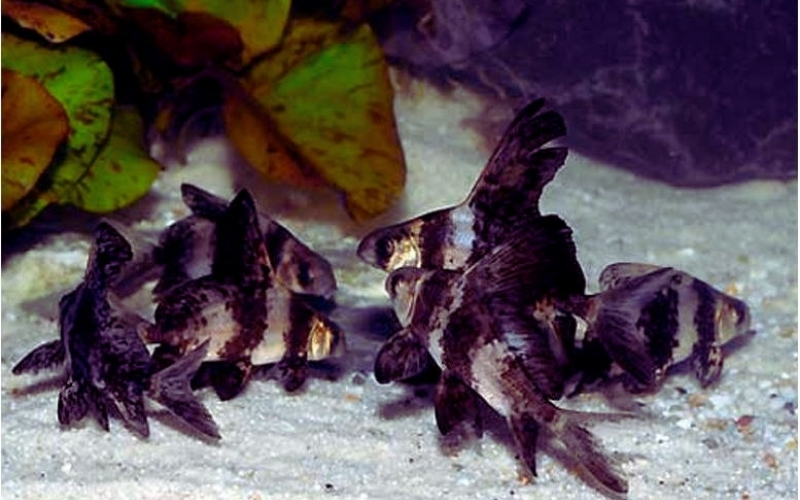 Are you considering breeding the high-fin-banded shark? Maybe you’re wondering if there will be unintentional reproduction in your aquarium.

We have found that breeding is quite difficult with these fish. You see, professional breeders may introduce hormones once Chinese high fins are of the appropriate size, length, and age.

However, we have found that they are rarely successful. It may be best not to attempt breeding in the home aquarium. It is very hard even if you have several adult high fin banded sharks.

The high fin banded shark isn’t for everyone. However, for the right person and the right tank or pond set up, they can be a wonderful addition.

They have a distinct dorsal fin, are often nearly purple in adulthood, and are an impressive size. It is unlikely that you will search out a more compelling fish to clean the bottom of your environment.