It can be overwhelming to consider all of the different varieties of betta fish. Turns out, dragon scale is one of the most striking, but is this betta fish right for you?

Here’s what you need to know about caring for the dragon scale, as well as some special concerns with this variety.

What is the Dragon Scale?

The dragon betta is a morph of the typical betta fish or Betta Splendens. It is also known as a dragon scale betta. Turns out, the dragon scale variety is relatively new.

Think about it: bettas are extremely popular aquarium fish. Therefore, it should come as no surprise that new morphs are coming out all the time.

This dragon variety of Betta Splendens has shorter fins than some other varieties of bettas. But wait, let me tell you something.

The dragon scale more than makes up for shortfin length in looks, thanks to its color and scales.  Breeding has resulted in a unique fish with unmatched body pigment, although these fish can’t be blue.

You see, breeding has caused the dragon scale betta fish to have large, thick more accentuated scales. Typically, its body scales are metallic in coloration. The underlying scales, which can be anything other than blue, is covered in white, leading to the dragon-like appearance.

Turns out, this thick layer of metallic scales is what gives the dragon scale betta fish the “dragon” in its name. The effect of the scales on the body may be silver, copper, white, or some other color.

Scales cannot be blue under the layer of white, but they can be red or another color. Here’s why: A blue layer of scales, unlike red, under white, means it’s not a true dragon. Question the breeding program of a blue dragon.

Why is the Dragon Scale Desirable as a Pet? It’s true that bettas, in general are popular pets thanks to how easy it is to keep them, their stunning color, how long they live, and the beautiful flowing fin structure. As if that’s not enough, betta fish are known for their intelligence and interesting personalities. They can also live in smaller tanks than other choices.

In case you might be asking yourself why you would take the trouble to find a dragon scale over another type of betta, here’s what you need to know about the dragon morph:

Care for the Dragon Scale Fish 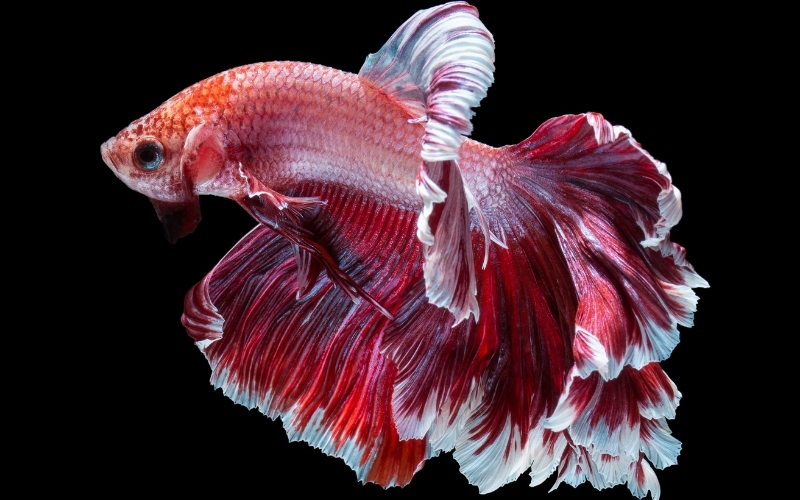 And the good news? For the most part, the dragon scale requires the same kind of care as most other betta fish. Even rarer colors need similar conditions to live well.

We think that it is worth the investment to get a betta fish that you know you really want since this species is long-lived and relatively easy to care for, regardless of body type.

On the other hand, the dragon scale does need some specific care requirements similar to any other bettas:

Now: unfortunately, too often, we find that betta fish are kept in extremely small containers, sometimes no bigger than a vase or glass of water. While it is true that it is possible for bettas to live in these conditions, you need to know that it will not be as healthy or happy.

Your dragon scale needs a tank of at least 5 gallons. Think about it: your fish needs room to grow, swim around, act out their interesting personalities, and search for food.

We know that you may find them in smaller tanks, but this gorgeous fish should earn additional space in your life. Going for a smaller space means less healthy fish.

This species will also be happy in a larger community tank. As long as you choose tankmates carefully, they can live in whatever size tank over 5 gallons that you choose.

You know Betta Splendens are native to environments with lots of live plants. No wonder they also prefer lots of plants in their aquarium.

Your dragon scale fish will not eat aquarium plants. Best of all, you can know that they won’t disturb plants by digging around the roots either.

Turns out, you can grow just about any kind of plant with your bettas, as long as they prefer similar conditions.

Little floating plants are especially desirable for the dragon scale fish. You see, they seem to choose to hover just under the roots of floating plants.

New fish in the tank are especially comforted by many floating plants.

You will also find that your dragon scale enjoys many kinds of soft, wide leaf plants. You see, they love lying on plants like this to nap as if they were on a hammock.

In our experience, it’s also a good idea to include driftwood. It’s true that driftwood is very beautiful.

As if that’s not enough, driftwood can also reduce the pH to the level that is preferred by bettas better than chemicals.

Indian almond leaves can also be an attractive way to decorate the aquarium at the same time as you keep pH levels low enough to be ideal for bettas.

Because the dragon scale has a shorter fin length than other varieties of betta, they are not as susceptible to current. On the other hand, these fish still do better with lower flow.

Simply put, you should choose a filter that does not produce a very strong current. If you want to keep your dragon scale in a tank with other fish and higher flow, put in things to break up the current.

Driftwood, rocks, and many patches of plants are all very effective. As long as you’re betta fish has places to get out of the current, they will likely be very content with their environment.

The betta fish is a tropical species. What does this mean for you?

They prefer warm water between 75 and 80 degrees Fahrenheit. Yes, they may be able to survive lower temperatures, but it will make them susceptible to illness.

Turns out, if you keep your dragon scale in an environment that fluctuates temperature and you don’t have a heater, they likely will not live as long as they could.

Betta fish are extremely hardy, able to tolerate a range of conditions. On the other hand, your dragon scale will do best if parameters are kept within their ideal levels:

Bettas can thrive within a number of conditions within these ranges. Nevertheless, it is very important to keep conditions stable.

Sudden changes in hardness or pH can shock your betta, leading to extensive stress or even death.

Turns out, it is a common misconception that bettas need to live alone. The dragon scale can actually coexist with a number of different kinds of fish.

Have questions about which fish? Here are a few tips to help you choose the right kind of tank mates:

It may seem that this will rule out many of the fish you may have chosen, but there are still a lot of varieties that work well with bettas.

Turns out, a wide range of tetras, including neon and ember tetras are good options. Many ground feeders such as loaches, plecos, and catfish coexist with the betta.

As if that’s not enough, some animals that aren’t fish but do fine with these fish include the African dwarf frog and decorative shrimp.

However, if you would rather have your Betta fish as a solitary specimen, they will do great alone too.

The Dragon Scale and Blindness 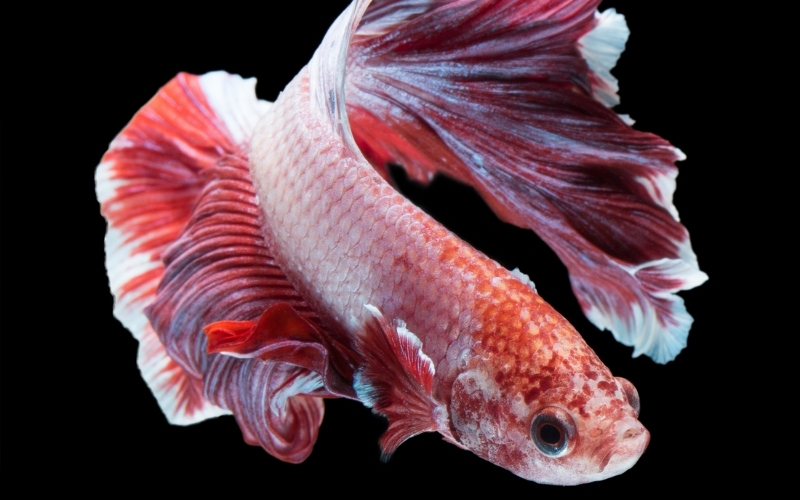 In our experience, one potential downside of this variety of Betta Splendens is that they can be prone to blindness. Their special metallic scales can be problematic.

You see, the scales can grow too quickly, covering the eye and leading to blindness. While this does not happen with every dragon scale, it is a possibility you need to consider when choosing this variety.

Turns out, you cannot guarantee that your dragon scale betta fish won’t go blind when you purchase them. Even if you buy from a respected breeder with a good program and admirable services, it may happen.

Nevertheless, there are some things to look for to set yourself up for a fish with health and beauty. When choosing a fish, look at if their eyes are already becoming covered.

What does this mean for you? Make sure that both eyes are clear.

To make it most probable that scales won’t cover the eyes, look for a fish with scaling far away from the eyes.

But wait, let me tell you something: Unfortunately, sometimes, the most sought-after dragon scale specimens have scaling all the way across their faces.

By now, you should realize that choosing the most beautiful betta and the healthiest fish aren’t necessarily the same thing.

It is up to you whether you want to take a risk with scales covering the face or not.

If Your Fish Goes Blind…

If you do find that your fish is going blind, it is best to have them alone so that you can be sure that they are getting enough food. Cues like tapping the glass and feeding in the same spot every day can help.

Simply put, you should remove anything in the tank that could injure your Betta, like things that are sharp or very rough.

Turns out, softer pH can thin scales, so adjust the pH to the lower level of what your Betta will enjoy reducing the scale covering over the eyes.

By now, you should realize that this betta is one of the most beautiful varieties you can find. The dragon scale is a stunning fish that thrives alone or in community tanks, but it does have some special health concerns.

Be prepared for the possibility of blindness or choose an individual with scales that don’t cover the face to set yourself up for success.